This is horrific and disturbing news and has changed the entire WBEFC picture of the Silver Carp Threat and our approach. Though dreadful to say, I will tell you with certainty, Wheeler, Guntersville, Nickajack, and Chickamauga will feel the identical fate as is being felt today at the Land Between the Lakes. Sport fishing there is gone, tourism has severely declined, and a great deal of money is being spent every summer to subsidize commercial fisherman to remove the Silver Carp. Last summer over a million pounds of fish were removed, yet, it had no positive impact on sport fishing or tourism—they only continue their plummet. Those two lakes alone (Barkley and Kentucky Lake) have lost over $1.2 Billion of economic income annually. Depressing as it is, this is the fate of those four lakes, and there simply is no longer any way to prevent it—it will take place—indeed depressing.

There is only one option for saving Watts Bar, Melton Hill, Fort Loudon and Tellico lakes. But it stands little chance of happening, for the environment and economic engines of these four lakes that make up the Upper TN River Basin aren’t enough to make TN legislatures take immediate action. They are in Nashville, and this region represent a tiny portion of the state, thus we have little power over Nashville/State politics. Here is the only realistic option—a Four-Phased Project.

Use emergency appropriations to begin speedy engineering design for an electric/bio-acoustic barrier on a ‘fast-track.’

Engineering design should begin immediately. Watts Bar and Melton Hill locks are very similar; thus, the engineering design can begin prior to knowing which lock with be fitted with the barrier. Once the presence or absence of the Silver Carp in in Watts Bar is determined, construction should begin on the Watts Bar Lock (assuming the determination that the fish have not breached the lock).

Begin the construction of the electric/bio-acoustic barrier at the Watts Bar lock. It is possible to complete construction in a three-year timeframe if on fast-track. Many of these have been constructed, and the National Environmental Policy Act (NEPA) process can be quickly carried out by duplicating past barrier constructions or set aside altogether since many electric barriers have been constructed. If needed, define this activity as an emergency “Pilot” project to protect the Upper TN River Basin. Pilot projects to not need a NEPA determination.

Locks have been shut down for extended periods before for badly needed replacement and maintenance. This would produce an economic hardship for barge transport, and others, but those hardships pale in comparison to the economic and environmental hardship that will take place in the region if the Silver Carp continue up the TN River Basin. Too, the economic hardship for barge transportation and others would be temporary, while the regional economic hardship and environmental/ecological devastation brought about by the Silver Carp will be permanent, and only escalate over time.

Here are the facts as I see them.

Can we save Watts Bar, Melton Hill, Fort Loudon, and Tellico Lakes? Yes!

Will our government save our lakes? Likely No!

Why won’t they? Politics, Money, Shortsightedness, and Slow to React/Timing.

Politics and government are largely shortsighted. Long-Term impacts are often ignored in favor of short-term political gain/cost. Finding $25-$30 million today, to prevent an annual $1-Billion loss in the future is obviously the smart thing to do, but there are any number of invalid excuses, such as the lack of available funds, other more important issues/activities, and ignorance. Even though I have shown that the cost can be easily recouped over time, most politicians want immediate gratification, and are not willing to fight for long-term benefits. This is incredibly shortsighted, but it seems political fact. The Upper TN River Basin of four beautiful lakes means little to the rest of Tennessee. If they all lived on our lakes and utilized the wondrous resources, or had businesses on the lakes, you can bet things would happen, but we represent a tiny portion of a very large State, and to the rest of Tennessee, we have little meaning or clout.

I am not at all optimistic about the outcome now that the invasive Silver Carp are in Chickamauga. Things will have to happen on a Fast-Track, and that phrase is not understood by legislatures. As well, getting the government to immediately close Watts Bar lock to barge traffic is highly unlikely due to the powerful pressure from the transportation industry to keep the lock open. As well, the government legislatures and agencies are largely procrastinators. It’s so much easier for them to ignore us or put any decision off until it is too late. They simply do not know how to weigh short-term against long-term benefits/loss. Perhaps if every lake homeowner, lake user, fishermen, boater, marina and lake business owner, county commission and local politician would speak as one voice, we could get the lock closed and the project initiated, but I don’t see that happening.

Should we stop trying? Heavens NO! Our incredible lake ecosystems and the economy they afford us are worth all the effort we can muster to try and protect them. We still need to bust our butts in every way we can to save our lakes and the WBEFC will continue to fight this battle, even with incredibly low odds of success. Thus, I ask that you help in any way you can and get everyone else you can to join this battle. There may be little chance of success, but if we are indeed successful in accomplishing this, we can all pat each other’s backs and know that we have left behind the greatest legacy any of us could hope for: Saving the ecology and economy of four wondrous lakes. I’d love to be part of that legacy and the WBEFC will continue this daunting fight, no matter the odd. Please join us.

I will be traveling to Nashville again on Wed, Jan 15th to provide my PowerPoint presentation to the Senate Energy, Agriculture, and Natural Resources Committee chaired by Senator Southerland. I have totally redone the presentation due to this horrible news, for everything has changed. I will present this only option to the full committee, and my understanding is that TWRA will be in attendance. I will literally beg them to take this to Governor Lee and explain the economic and ecological devastation, and show him that he has an exceptional opportunity to leave behind perhaps the greatest legacy any governor could hope for: Saving an Entire River Basin from environmental and economic devastation. All he must do is close Watts Bar lock and provide the money construct the barrier—so very easy. BUT WILL HE?????

I seriously doubt he will, but let’s hope for success. 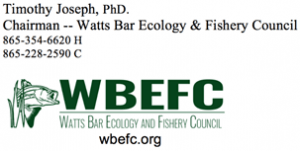